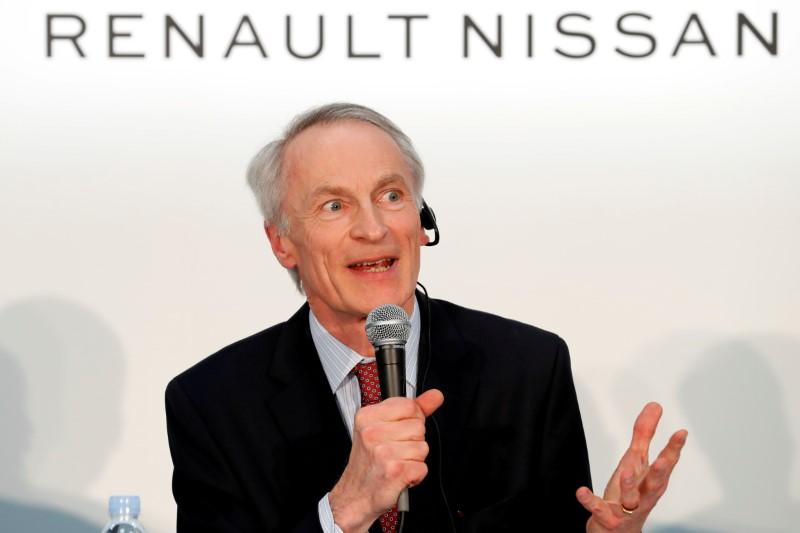 PARIS (Reuters) – Renault (RENA.PA) Chairman Jean-Dominique Senard said on Thursday there was a “real desire” at the helm of the carmaker’s alliance with Nissan to make it a success, seeking to dispel suggestions the two decade partnership might be on the rocks.

The Franco-Japanese alliance, long dogged by internal rivalries, was thrown into turmoil by the November 2018 arrest in Tokyo of its architect and long-time boss Carlos Ghosn on charges of financial crimes, which he denies.

Attempts to restore calm have recently been thwarted by Ghosn’s dramatic flight from Japanese justice and a series of no-holds-barred allegations he has made from his refuge in Lebanon, including that he was the victim of a plot to oust him and that the alliance is now a “masquerade”.

Nissan (7201.T) has vigorously denied any suggestion of a plot, while both the Japanese firm and Renault have rubbished suggestions their 20-year-old partnership is falling apart.

“We have a board overseeing the alliance which is made up of people who are all extremely in favor of the alliance,” Senard told a news conference, defending the changes he had made since joining Renault after Ghosn’s arrest.

“There is a common desire to associate our strategic plans and a real desire to make this alliance a success,”

Senard, who used to run tyre maker Michelin, has become the de facto senior figure in the partnership, though without the commander-in-chief aura Ghosn had, which had helped hold the alliance together.

While that is partly deliberate – as both parties are keen to avoid another Ghosn-style strongman and created a four-member operating board to oversee the alliance for example – Senard will have to deliver on launching joint new projects.

The 66-year-old has said these will move into focus once a management revamp is complete. A new CEO started at Nissan in December, and Renault is in the midst of seeking a new CEO after ousting Ghosn-ally Thierry Bollore in October.

Luca de Meo, who recently stepped down as the head of Volkswagen’s (VOWG_p.DE) Seat brand, is seen as the frontrunner, although a non-compete clause in his contract is proving a problem, sources close to the matter have told Reuters.

Interim CEO Clotilde Delbos is also in the frame.

Analysts view Renault-Nissan’s cost-cutting alliance as vital to both companies’ fortunes as the car industry battles a slowdown in demand and huge investments in cleaner vehicles and automated driving, particularly as rivals PSA (PEUP.PA) and Fiat Chrysler (FCHA.MI) are merging to help meet these challenges.