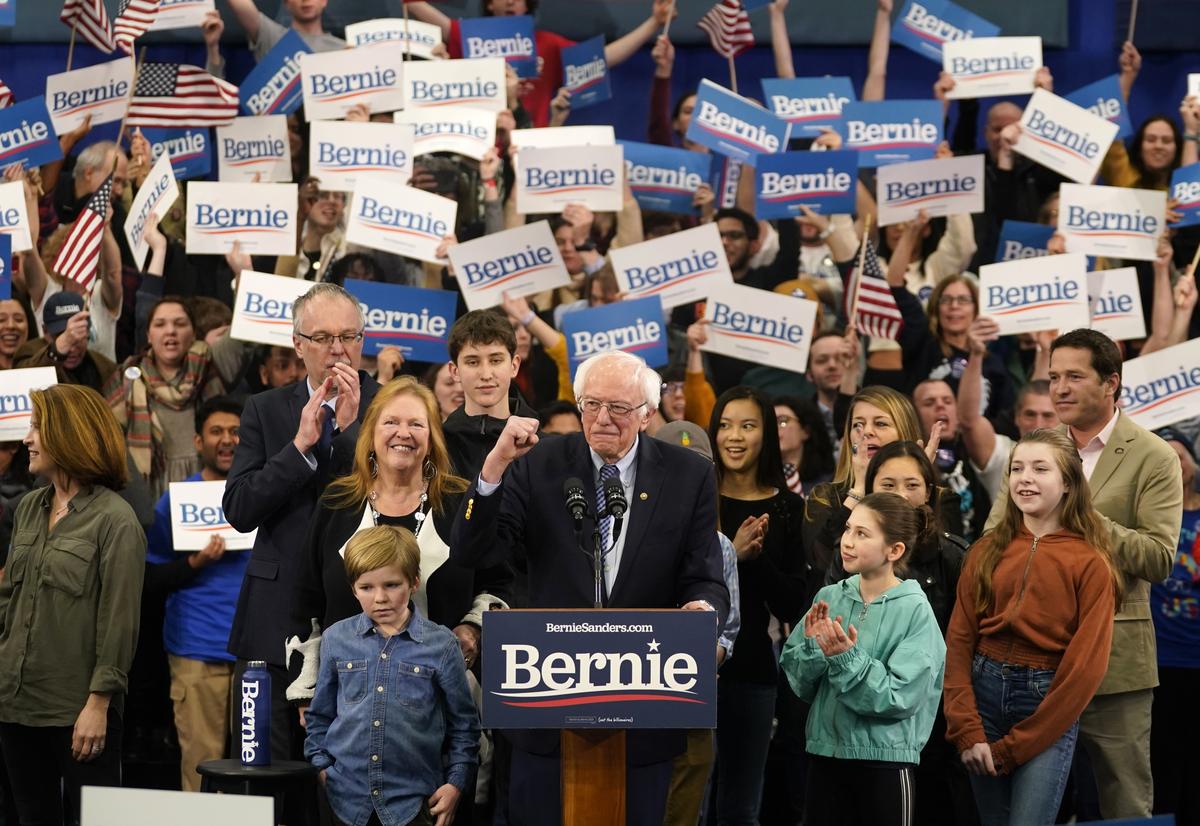 Pete Buttigieg, the former mayor of South Bend, Indiana, who narrowly edged out Sanders in last week’s messy Iowa caucuses, came in a close second, after splitting much of the centrist vote with Senator Amy Klobuchar.

Sanders, a progressive senator from neighboring Vermont, prevailed after fending off attacks from rivals who warned his left-wing views would lead the party to defeat in the Nov. 3 election against Republican President Donald Trump.

“This victory here is the beginning of the end for Donald Trump,” Sanders told supporters in Manchester, New Hampshire.

In a sign of the growing rivalry between Sanders, the 78-year-old self-professed democratic socialist, and Buttigieg, a 38-year-old moderate, Sanders’ supporters booed and chanted “Wall Street Pete!” when Buttigieg’s post-primary speech was shown on screens.

It was also a good night for Klobuchar, who rode a wave of momentum from a strong debate on Friday into a third-place finish. But Senator Elizabeth Warren, who was considered a favorite in New Hampshire until a few months ago, finished fourth, which cast further doubt over her continued viability as the progressive alternative to Sanders.

The results provided no clear answers for Democrats trying to decide whether their best choice to challenge Trump would be a moderate like Buttigieg, Klobuchar or Biden, or a progressive like Sanders and Warren, who represents neighboring Massachusetts.

Turnout in New Hampshire approached the record 287,000 who cast ballots in the 2008 Democratic primary, when the battle between Barack Obama and Hillary Clinton energized the party. That could ease Democratic concerns about the smaller-than-expected turnout in Iowa.

Biden, the former vice president who was once the front-runner in the Democratic race, limped to his second consecutive poor finish after placing fourth in Iowa. He is certain to face growing questions about his campaign’s staying power and his ability to consolidate moderate support against a surging Buttigieg and Klobuchar.

He also faces competition from Michael Bloomberg, the billionaire former New York mayor who is skipping the four early voting states in February and pouring resources into much larger, delegate-rich states such as California that will vote on March 3, known as Super Tuesday.

GRAPHIC: Calendar of each state’s Democratic nominating contest and its allocated delegates – here

Biden fared poorly in two previous runs for president before winning election in 2008 as President Barack Obama’s No. 2. He hopes to stay afloat this time until the Feb. 29 contest in South Carolina and a series of contests in other Southern states on Super Tuesday, where his support among African Americans will be a strength.

Without strong showings there, his race could be over.

“It ain’t over, man. It’s just getting started,” an energetic Biden told supporters in South Carolina.

“We just heard from the first two of the 50 states,” he said. “Where I come from, that’s the opening bell, not the closing bell. And the fight to end Donald Trump’s presidency is just beginning.”

For Sanders, who won New Hampshire in 2016 with 60% of the vote against eventual nominee Hillary Clinton, the results offered new momentum but not the overwhelming win he had hoped for given his history in the state. Exit polls showed he only won about two-thirds of his 2016 primary supporters.

He and Buttigieg each won nine delegates from New Hampshire to the national nominating convention in July. Klobuchar won six, while Warren and Biden were shut out.

The results began to thin the field of Democrats seeking the right to take on Trump in November, with businessman Andrew Yang and Senator Michael Bennet dropping out after it became clear they would finish well out of the running. CBS News reported that Deval Patrick, the former Massachusetts governor, would drop out on Wednesday.

After Iowa and New Hampshire, small and rural states with predominantly white populations, the race will move on to more diverse battlegrounds that pose new tests.

“We have beaten the odds every step of the way,” Klobuchar told supporters in Concord. “Because of you, we are taking this campaign to Nevada. We are going to South Carolina. And we are taking this message of unity to the country.”

Warren said it would be a long, drawn-out battle for the nomination and the race was far from over. She decried the party’s infighting and called for unity as the contest moves on.

“These tactics might work if you’re willing to burn down the party to be the last man standing,” Warren said in Manchester. “We win when we come together.”

The late attacks on Sanders in recent weeks were a shift in tactics for his rivals, who had mostly ignored him out of worry about a backlash from his fervent cadre of supporters and out of doubts that Sanders could expand his base.

Buttigieg, who would be the first openly gay U.S. president if elected, still faces questions about what polls show is his weakness with African-American voters, one of the most loyal and vital Democratic voting blocs.

He also decried the growing polarization of politics and the recent Democratic infighting.

“In this election season, we’ve been told by some that you must either be for revolution or you are for the status quo. But where does that leave the rest of us?” Buttigieg asked supporters in Nashua. “A politics of my way or the highway is a road to re-electing Donald Trump.”