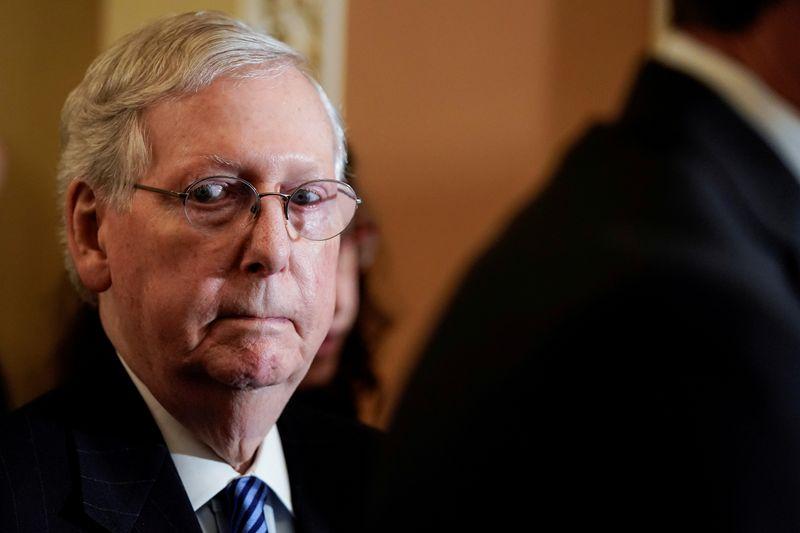 WASHINGTON (Reuters) – U.S. Senate Majority Leader Mitch McConnell raised the prospect on Tuesday of a short Senate impeachment trial for President Donald Trump in which no witnesses would be called.

The scenario of a truncated trial would put McConnell, the top Senate Republican, at odds with Trump, also a Republican, who has been calling for a full trial with witnesses, including former Vice President Joe Biden, on the Senate floor.

The Democratic-controlled House of Representatives is expected to vote to impeach Trump next week after unveiling formal charges against him on Tuesday.

The charges accuse Trump of “betraying” the country by abusing power in an effort to pressure Ukraine to probe Biden, a 2020 Democratic presidential contender, and then obstructing Congress’ investigation into the scandal.

Trump has denied any wrongdoing and has made the Democratic-led impeachment inquiry a rallying cry for his supporters as he attempts to win re-election next November.

McConnell stressed in remarks to reporters that no decisions had been made on how a trial would proceed if the House approves articles of impeachment against Trump.

McConnell said any trial would begin with House Democrats making their case for finding Trump guilty on the two articles followed by White House lawyers arguing for an acquittal.

At that point, McConnell said, the Senate “could go down the path of calling witnesses and basically having another trial.”

Or, he said, 51 senators could come together, which would be a majority of the 100 senators, and decide “that they’ve heard enough and they believe they know what would happen and could move to vote on the two articles of impeachment sent over to us by the House.”

Senate Democratic leader Chuck Schumer has said he hopes for a “full” and “open” trial that is not cut short.

There are 53 Republican senators, 45 Democrats and two independents who regularly align with Democrats. Two-thirds of the Senate, or at least 67 if all 100 are present, are needed to find a president guilty of impeachment charges and remove him from the White House.

No Senate Republicans have indicated so far they are considering such a move.

While Trump has repeatedly called the House Democrats’ impeachment investigation a “witch hunt,” he also has called for a trial with witnesses testifying.

In a tweet on Dec. 5, he wrote: “We will have Schiff, the Bidens, Pelosi and many more testify.” He was referring to House Intelligence Committee Chairman Adam Schiff, Biden, his son Hunter and House Speaker Nancy Pelosi, all Democrats.

White House legislative liaison Eric Ueland told reporters after that meeting that in order for Trump to make an effective case to the Senate, “We need both a full trial and the opportunity to call witnesses,” pointing to the Senate chamber.

A long Senate trial could delay the chamber’s approval of a U.S.-Mexico-Canada trade agreement known as USMCA, which would replace the North American Free Trade Agreement, and detract from Republican senators’ campaign message of a strong U.S. economy as some of them seek re-election next year.

During Democratic President Bill Clinton’s 1999 impeachment trial, no witnesses testified on the Senate floor. Instead, videotaped depositions were done with just a few witnesses, which senators could screen privately. Clinton was acquitted in the Senate on charges arising from his sexual relationship with a White House intern.

‘Game of Thrones’ actors among Amazon’s ‘Lord of the Rings’ cast
Djokovic faces Struff, Barty takes on Tsurenko at Australian Open
Brazil’s tribes stride into digital age to defend their culture, forests
Nestle to invest up to 2 billion Swiss francs to shift to recycled plastics
Rhode Island Governor aims for 100% renewable power by 2030